But not a perfect afternoon

The Met. Office mountain weather forecast for the area, (Monday night), had said that Tuesday was going to be wall to wall sunshine all day, so I decided to go for a walk from Great Langdale, up Pike of Blisco and Crinkle Crags.

Until lunchtime, the weather was indeed superb, - then, out of nowhere, the mist came down, big-time.

So much so that I abandoned my intentions to carry on across Bowfell, retracing my route back across the Crinkles, finally getting below the mist down near Red Tarn, and then back down to Langdale via Brown Howe and Oxendale. (The mist had almost gone in pic. 5 below).

Great day for photography until the mist came down, and plenty of fungi to be seen on the fells, including: - Cordyceps militaris, Cystoderma amianthinum (see 3rd pic.), Galerina sphagnorum, Hygrocybe laeta, Hygrocybe pratensis, Hygrocybe coccinea, Mycena galericulata, and several others that weren't so readily identifiable.

A few pics from the day: -
(Photo descriptions in list form below, to ensure that thumbnails show correctly in grid-layout).
Photo 1 - Langdale Pikes from beside Redacre Gill.
Photo 2 - Looking down to Side Pike from the path to Pike of Blisco.
Photo 3 - Cystoderma amianthinum with Langdale Pikes in background.
Photo 4 - Crinkle Crags and Bowfell from summit of Pike of Blisco.
Photo 5 - Looking back up to the Crinkles with the mist having almost lifted.
Photo 6 - Fading light at Stool End Farm, on the valley walk back to the car. 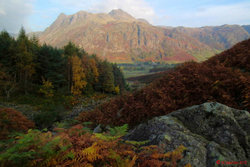 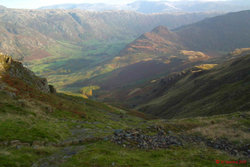 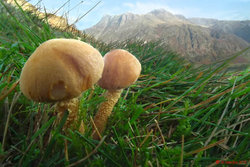 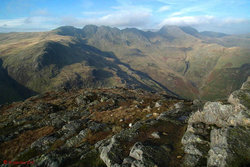 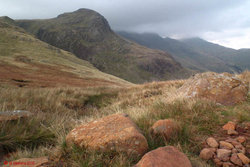 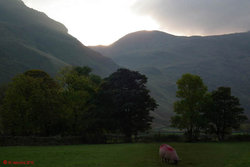 Yes, no-one commented until now! Lovely photos, one of my favourites parts of the UK.
Adam Pollard
Site admin
Top

Thanks for the comments both.

As the mountain weather forecast on Friday gone had said that Saturday was going to be a fine winter’s day in Cumbria, and because I knew there is a lot of snow on the fells at the moment, I decided on another quick trip to the Lake District – this time to climb Bowfell, which, as mentioned above, was abandoned on my last outing due to heavy mist.

Once again the morning was great – with the fells in full winter conditions, needing crampons & ice axe etc. Fantastic conditions for photography, and for being out and about in this superb scenery.

Some parts of the paths (where they could be found – there is a lot of snow about!) were solid with ice, and where they couldn’t be found, the snow was difficult to cross – lots of windslab over soft powder, sinking in to knee high too many times to recall, and sometimes almost waist deep!

Unfortunately, winter conditions aside, the day unfolded with a slight case of déjà vu.

The morning’s weather was superb, but it started snowing at about lunchtime, just as I was nearing Bowfell summit, and the visibility thereafter soon became pretty grim.

I’d intended carrying on to Esk Pike, Esk Hause, and then Rossett Pike to finish off the day, but it wasn’t worth continuing in what was fast becoming a whiteout on the ridge, so I headed back down.
(My days of carrying on regardless in weather where you practically can’t see your hands in front of your face have long gone!).

Got some nice photos on the way up though! 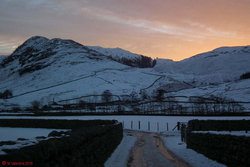 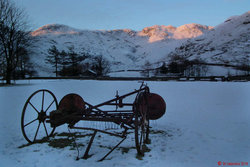 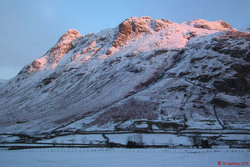 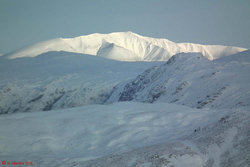 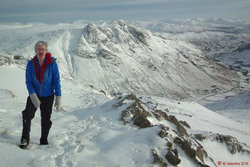 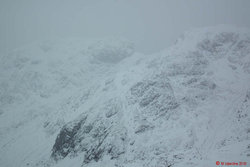 Fantastic. I love walking in cold weather! We have no proper mountains nearby, have to drive 3 hours to get to Snowdonia.
Adam Pollard
Site admin
Top

Pictures worthy of the effort you must have put into the day. Happy New Year to you and to all our UK fungi people.
Top

Thanks Adam and Nan.

The vista of a distant snow clad Blencathra during my Bowfell trip had me wanting to be up there, so I made another visit on Wednesday to do Blencathra by Hall's Fell Ridge: - 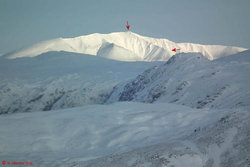 Once I'd been up Hall's Fell Ridge, I decided walk down to Scales Tarn - and then climb back to the summit via Sharp Edge.
Weather-wise, almost déjà vu once again!
Fantastic all morning, and then on the way down to Scales Tarn the cloud and mist arrived, and it was something of a pea-souper all the way up Sharp Edge.
Luckily though, this time the clouds disappeared as quickly as they arrived. By the time I got back to the top the cloud had lifted above summit level, and the walk down to the valley via the ridge of Scales Fell enjoyed good visibility all the way.

A few pics from the day: - (Photo descriptions in list form below, to ensure that thumbnails show correctly in grid-layout).
Photo 1 - Early morning sun on Causey Pike, Sail, and Crag Hill, with a distant Grasmoor behind.
Photo 2 - Looking back down the first part of Hall's Fell Ridge.
Photo 3 - Cornices along Blencathra's famous saddleback, with Skiddaw massif behind.
Photo 4 - Yours truly, with the diagonal of the final section of Hall's Fell Ridge behind.
Photo 5 - Sharp Edge, just before the clouds came in.
Photo 6 - Sharp Edge about two minutes later when the cloud had arrived. 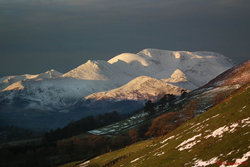 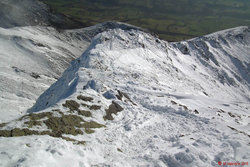 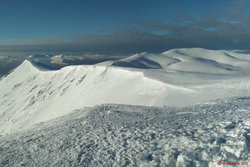 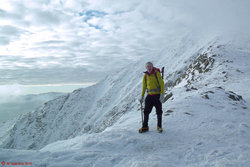 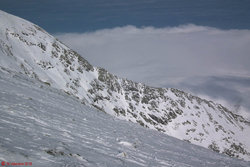 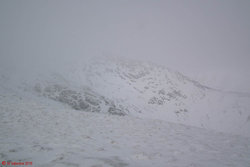 The fells of the lake district are a taste of heaven. Your excellent images here Mike have reminded me of an area I have many fond memories of. I still view my Wainwright's with the same enthusiasm as I did back in the 70's

Keep going back to see your wonderful photographs, so jealous! Just realised of course that I did not say how much I am enjoying them

With the return of winter conditions after the recent thaw, I made another journey to the Lake District on Friday (12th) with the intentions of climbing St, Sunday Crag, Fairfield, and Hart Crag. - The plot continues.

but this time, another perfect morning - and a fairly disastrous afternoon!

Not a particularly spectacular day weather-wise, (although sometimes, patchy mist can make for quite dramatic/brooding landscape photography), but the snow was in good condition for walking/climbing.

All was extremely enjoyable until I’d almost reached the top of Cofa Pike on Fairfield. Where, after just starting to climb a steep, (maybe 45-50 degree), snow-gully, with rocky outcrops, (front-pointing with crampons/ice-axe), I suddenly felt an excruciating pain in my left leg, and fell backwards. (It felt as though a rock had fallen from somewhere and slammed into the back of my leg).

Fortunately, I was able to quickly arrest my fall with the ice-axe, and lying in the snow was left wondering exactly what had happened. – I then tried to stand up, at which point I realised that I’d done something untoward to my leg. The pain was quite unlike anything I’ve ever experienced!!! – A tricky situation! – almost at the top of Fairfield, miles away from anywhere, and not a soul around.

After some minutes, and with thoughts of potentially needing to call out the Mountain Rescue team, I realised that although it was very painful, with some difficulty, and using a pair of recently bought telescopic walking poles as crutches, I could just about hobble along if I kept my left leg bent, with only the toe of my boot touching the ground.

Slowly but surely, I managed to ease my way down the mountain, where, after a couple of miles, (and about three hours!

), I was caught up by two climbers, coming down via the same route. They offered much assistance, and stayed with me for company (for which I was very thankful!). A mile or so later, from Thornhow Farm, (where we met a couple of people with a van), I was given a lift back to the climbers car, where I was then ferried back to my own car.

Strangely, whilst sitting down with the leg bent, I was in no pain at all, and could function completely as normal. – Very thankfully, because of that, driving was no problem, and I was able to drive myself home – and thence to A&E in my home town.

Cutting a long story short, it seems that I’ve either snapped my Achilles tendon, or torn my calf muscles, and as I type this, I’m laid up at home, awaiting the checking of x-rays and, dependent on final diagnosis, the specialist’s to come back to me with their “plan of action”.

Looking on the bright side - it could have been worse.

So folks, a few photos taken on the day, before the dastardly deed occurred – but not much likelihood of any further installments in the very near future! 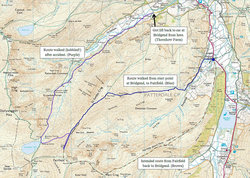 A few pics from the day: - (Photo descriptions in list form below, to ensure that thumbnails show correctly in grid-layout).
Photo 1 - Dove Crag and Hart Crag from summit of St. Sunday Crag.
Photo 2 - Close-up of Hart Crag.
Photo 3 - Fairfield and Cofa Pike with Grisedale Tarn in the distance.
Photo 4 - Close-up of Fairfield & Cofa Pike.
Photo 5 - Looking back to St. Sunday Crag from below Cofa Pike.
Photo 6 - Striding Edge from Cofa Pike. 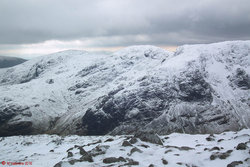 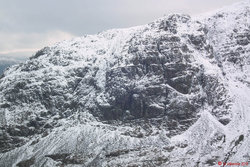 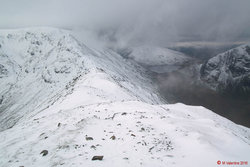 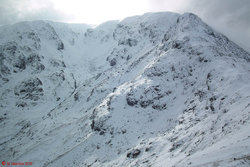 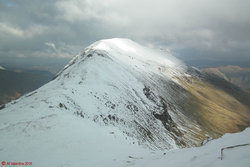 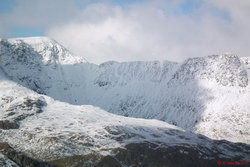 Fabulous photos again. Full of admiration for you getting yourself down, what a nightmare! Will be thinking of you on your road to recovery. At least when I snapped my Achilles tendon, I only had to get down off Crosscraigs and hop 6 miles using 1 walking stick and hubby holding me up, many years ago I might say.
Top