Back to basics.
I've been looking at twigs from a hybrid poplar tree in lowland Gloucestershire. A very early coloniser is a Lecanora with a bright white fimbriate prothallus. Apart from that it conforms to my understanding of chlarotera/hybocarpa with appropriate chemistry and crystal distribution in the fruit. Too lumpy and large for hagenii. Even with a fimbriate prothallus, surely it is not campestris or horiza. I don't know populicola, but it doesn't read like it.
Is the literature (FGBI12 and Dobson2018) misleading about the importance of the absence of a prothallus, am I interpreting the meaning of prothallus wrongly, is it not chlarotera/hybocarpa in any case?
Juliet 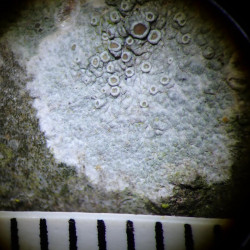 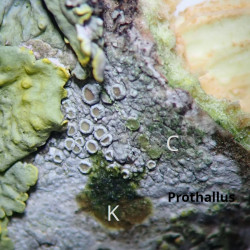 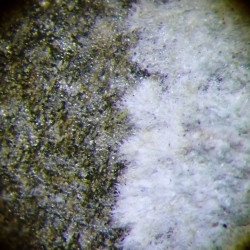 Prothallus colonising shiny bark. Easy to pick off with a pin.

Section of apothecium from different individual. 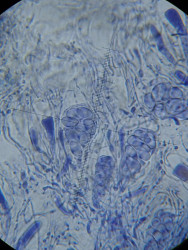 Re: Lecanora hybocarpa with prothallus?

The cross section shows typical Lecanora hybocarpa, with large crystals in the thaline margin with the smaller crystals in the epipsamma extending down between the acsci and paraphyses. The fimbriate prothallus is something many lichens can produce when colonising rapidly over pioneer species that can not resist but do not when locked against their peers in the completion stakes. I am meaning to put up a post about the brown fimbriate prothallus that Enterographa sorediata has in similar circumstances.

The following is a picture of Megalaria laureri, which is described as having a black prothallus in LGBI2 (which is normally correct) but here a recent colonist on a New Forest Beech has a white fimbriate prothallus where over growing Porina spp but does not where it has met its match with Enterographa crassa (bottom right). 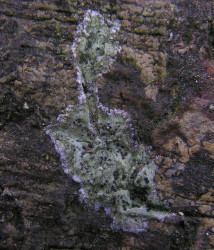 Re: Lecanora hybocarpa with prothallus?

I guess the white prothallus in these circumstances is caused by the mycelium of the fungal partner growing out faster than the algae can divide. And a general point (i.e. not directed towards those posting on this topic) - prothalli cannot reliably be detected between lichen colonies that are closely juxtaposed - the black lines often seen in those circumstances are more likely to be melanization caused by competition stress. Battle scars, if you will...