I was always uneasy about Lecanora chlarotera. It seems as though most of the material I find in South Midlands and Home Counties is L. hybocarpa now that Neil has so helpfully brought this to light. I was uneasy for two main reasons. Firstly, the material I was 'forced' to name as L. chlarotera had rather coarse epithecial granules which descended down into the hymenium. Secondly the granules appeared to be totally insoluble in nitric acid (I even tried heating a section in very strong nitric acid!).

I collected some typical material on young ash stems today. The thallus and thalline margin is K+ yellow and Pd-. 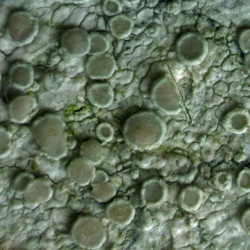 The thalline margin has clusters of massive crystals typical of this group. 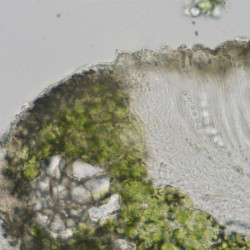 Now for a look at sections through the hymenium (mounted in water). 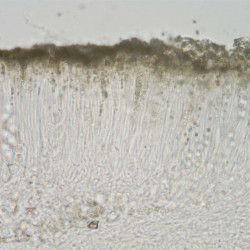 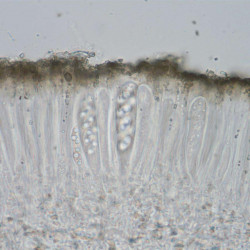 These show rather coarse crystals descending deeply into the hymenium. I haven't got a set up to easily take photos in polarized light but these pale brown granules shone brightly in polarized light, with a slight off-white yellowish tinge.

As Neil has suggested, there appear still to be some other rather rare specimens which may belong to other semi-cryptic taxa but at least we now have good guidance on how to distinguish L. chlarotera and L. hybocarpa.
Top

Yes, I am still finding that Lecanora hybocarpa is dominant in the south on open sunny habitats. Most material with pale cloudy disk seems to be this!

One thing I am spotting more on Beech in the New Forest is Lecanora intumescens, which I had been over looking. I was expecting the big beefy material seen in the uplands, with strongly crenulate thaline margins which were obviously finely fluffy (decorticate): 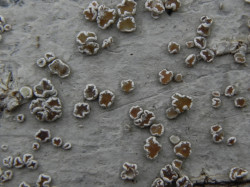 Looking more closely at local Lecanora species, however, I have begun to spot the rather smaller lowland material: 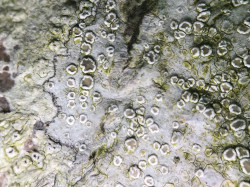 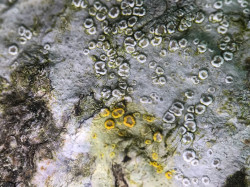 Lecanora intumescens on Beech, by Ashurst Lodge, New Forest, lower picture shows the Pd + yellow spot test on the thaline margins, which combined with the fluffy margin is diagnostic. The top picture has Pertusaria pustulata on the lefthand side, which is due a post sometime.

Lecanora intumescens has a lot of pre-2000 records for England and Wales https://www.britishlichensociety.org.uk ... ntumescens, so looks like it might be declining, but possibly it has just been over looked. So worth being aware of this species and looking out for it in clean air areas. Potentially it could be recovering and populations increasing.

As you know, in the past I've sent you some specimens and photographs of Lecanora chlarotera types, which understandably you were very non-commital about, so it is really good that you are finally managing to make sense of some of them!

This was on Aspen in Browndown Fen, Gosport, in 2011 which I always thought looked good for L. hybocarpa, but it is not in strong light. The mixture of cloudy and non-cloudy discs is interesting. I should have a specimen somewhere. 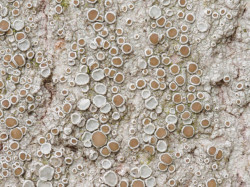 These two were from sunlit Ash or Sorbus in one of the parks in Gosport (from 2008 and 2011) - but I think they are particularly good examples of L. sinuosa. 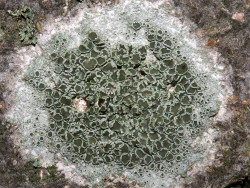 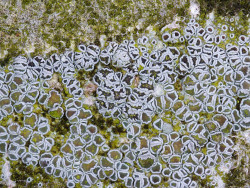 However, this last one I thought might be L. intumescens and does match your photos (growing side by side with L. chlarotera?). 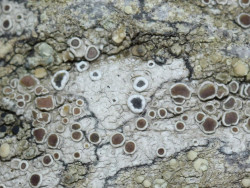 For the Lecanora hybocarpa/Lecanora chlarotera/Lecanora argentata group it is difficult to be very certain without doing a cross section.

Pic 1 is either Lecanora argentata or Lecanora chlarotera at a guess. The cloudy disks might be old or eaten out apothecia

Pic 2 most likely Lecanora hybocarpa, not quite right for Lecanora sinuosa (no failed apothecia initials), but these are probable the same species anyway.

Pic 3 this looks quite exciting, I would say Lecanora intumescens actually, again no failed apothecia initials. I would need a closer picture to see if the margin lacks a cortex but it looks that way

Pic 4 yes I would say probably Lecanora intumescens as well

This is a picture from Browndown in 2013 of Lecanora sinuosa, with potentially normal Lecanora hybocarpa above 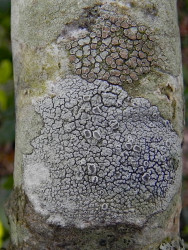 I was alerted to this thread somewhere else and I wondered whether the situation might be the same over here across the sea in Denmark as well, thanks for the detailed writeup. L. hybocarpa has never been recorded here as far as I can tell (it's neither on the national checklist nor in the Danish Mycological Society's records database). A lot of my local L. "chlarotera" matches your macroscopic suggestive characters so on a whim I decided to pick up some on a walk yesterday and tried to cobble together a polarisation microscopy setup.

The specimen was growing on an almost fallen-off piece of bark on a small tree (that I wasn't able to identify) by a golf course, and has pale disks with a light, fine pruina, especially on the young ones. The thallus and thalline margin are K+yellow Pd-. 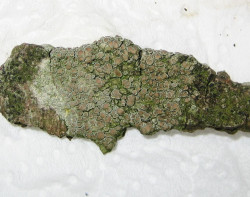 I tried sectioning it and while there did seem to be at least some places where the granules penetrated into the hymenium it was not clear as some of the images here and most of them seemed to sit at the top. With my complete lack of experience I don't feel comfortable identifying this as one or the other. The granules were highly soluble in K, I barely had time to see them disappear after flushing a drop through the slide. 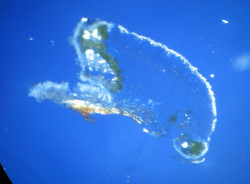 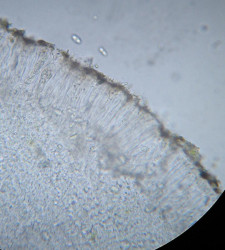 (I apologise for the somewhat lackluster image quality, if there is a prize for most janky thing done with a microscope my jamming two pieces of polarising plastic i had around in and manually holding and old camera up to the eyepiece of my cheap scope probably qualifies.)

Is this L. hybocarpa, L. chlarotera s.str. or is it not possible to tell from the available material?
Top

I'm afraid that I am not going to give you a confirmed identification of your Danish material but I think it looks very much like the specimens which we now (thanks to Neil) consider to be L. hybocarpa in Eastern England. I applaud your 'janky' set-up and think it worked remarkably well. On this close-up from your micrograph, I have drawn a dashed line in red which roughly corresponds to where I think is the base of the hymenium. Below this is the colourless sterile tissue of the hypothecium (which looks similar at low power). I have ringed in orange where I consider there are relatively coarse epithecial crystals which are descending quite significantly into the hymenium (not confined more strictly to near the surface). 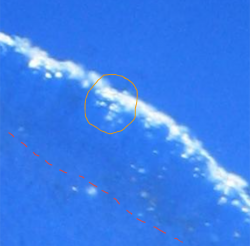 Perhaps Neil will be prepared to be more assertive than me. I have only just started to investigate the matter so I am treading carefully. I think you should be very hopeful that your material will turn out to L. hybocarpa rather than L. chlarotera s. str.
Top

Lecanora hybocarpa should be in Denmark as it appears to be a lowland oceanic to sub-oceanic species in Europe.

Thank you for the answers Mark and Neil.

I will leave this one as uncertain then and try collecting some additional specimens, and return for confirmation if I find something more unambiguous. The whole group seems fascinating, if difficult, and I might try to carry out a small informal survey of them in my area, in an attempt to familiarise myself with them, when I have winter break in a couple of weeks.

Is there any literature you can recommend that deals with this group in more depth, or is the information scattered in many places? The keys and floras I have access to all seem to have various problems with this group, the one in Dansk Lavflora even fails to assign this collection to L. chlarotera s.lat. if followed uncritically and instead dead-ends between two obviously wrong choices because it only keys out if one chooses "12b. Disks without pruina (even when young)" rather than the opposite much earlier in the key.
Top

Hi Neil,
Fascinating thread and I'm hoping this Lecanora on a fallen twig in Wimborne, Dorset might also be a candidate for Lecanora hybocarpa?
Thallus and apothecia margins were K+ yellow but I've no Pd, section in water 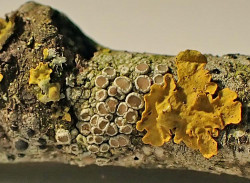 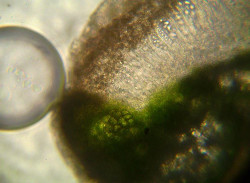 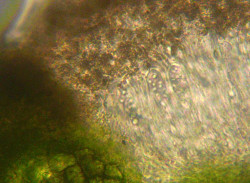 Looks OK, with the course brown granules penetrating down into the hypothecium. It is common, so you should find it about