This creamy white corticioid was on the underside of a log – likely broadleaf, in a young woodland - mostly oak, near to a pine plantation.
It produced a white spore deposit, which I pretty sure was non-amyloid (although I failed to make a note of this I always check corticioid spore deposits with Meltzers). The spores were by far the most interesting feature of this fungus, as I failed to find any cystidia or anything else which was striking.
The spores were smooth, sub-spherical, spherical,or even flattened spherical (broader than long) 4-5 x 4.5–5. Searching Corticiacea of Northern Europe gave a blank for “spherical” – so I searched for “globose” and got a number of species with globose/sub-globose spores, including Aethelia decipiens (didn’t look right), Hypochnicium vellereum (finely warted spores), H. spaerosporum (with cystidia), Radulodon (thickened walls) – and nothing else with spores the right size, except “Byssocorticium”. None of which have many records in the FRDBI.
However, although the spores look superficially OK, they should be “conspicuously stained by cotton blue” and have thick walls. I tested dead spores and didn’t really get anything like this.
From the Byssocorticium key in CNE I was unable to match anything.
Trechispora cohaerens could be a possibility. CNE desribes the short, irregular and "triangular" shape of some hyphal cells - which is a feature of my specimen. Although the pores of T. cohaerens are slightly more ellipsoid in CNE and FOS, they are broadly the right size. This is apparently a loosely defined species anyway. 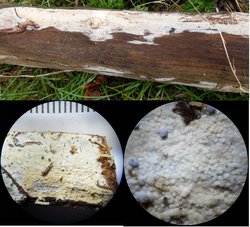 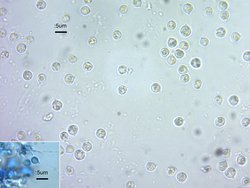 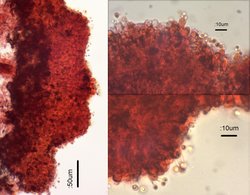 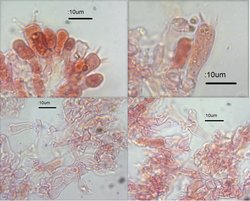 Basidia and hyphae in Congo Red

Looks like Brevicellicium olivascens to me. Subglobose spores with slightly flattened side are typical.
Top

Good to see a name from (quite) a while ago, Peter

"You must know it's right, the spore is on the wind tonight"
Steely Dan - "Rose Darling"
Top