Hi can anyone please help me to identify these fungi. We have never had them in our garden until the start of the crusty looking one last year. We think they could be causing lung issues for my husband as he was working in the pebbles area last week. The crusty one was on the surface of the soil and the white one in the pebbles is in the lower area of the garden underneath. When disturbed in pebbles there is a strong mushroom smell. If we can identify it/them hopefully we can treat it to eradicate? An old cherry tree in the neighbour's garden about 10 ft from us which was apparently rotting inside and covered with ivy was cut down in September so not sure if there is any link, although the surface fungus was around last year. Our house backs onto open land with cows and sheep and for the first time in 20 years, we also have different types of mushrooms growing a few feet from our garden. Any advice would be most welcome please and thanks in advance for your help. 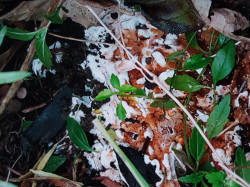 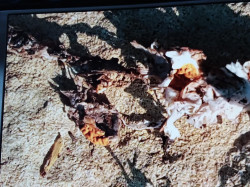 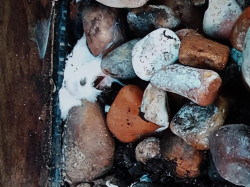 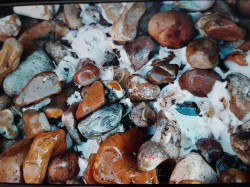 I'm struggling to suggest something here, as I don't think that the fungus fruitbody is sufficiently well grown to display all of its likely macro characteristics.

In the first photo, the lower brownish coloured areas have the sort of folded/wrinkled surface that I'd normally associate with one of the Phlebia species. (Although that colour, if accurate, doesn't ring any bells for a particular species).

But for some reason I'm also thinking of the possibility of the beginnings of Abortiporus biennis - even though what we have here doesn't particularly look like that species - (With there being no evidence of angular pores).

Both of those are "wood rotters". They would be obtaining their nutrients from dead wood, and wouldn't pose any threat to living plants/shrubs/trees.

I'd be extremely surprised if your husband's lung problem would have been caused from having been in close proximity to the fungus as the chances of that sort of reaction would be infinitesimally small.
(Although I would have to make the caveat that such a reaction couldn't be ruled out as an absolute impossibility!).

As for eradicating it. - What you see here is just the fruiting body. The main part of the fungus (the mycelium) will be underground in the soil and in whatever dead wood is there.
Getting rid of the mycelium would be nigh on impossible whilst the fungus still has access to whatever dead organic material it is getting its nourishment from.

Hopefully someone else might be able to provide a more confident response.

I may be coming to this rather late, but that wrinkled surface makes me think of a Serpula species; not necessarily dry rot (unlikely outdoors), perhaps S. himantioides compare with https://www.projectnoah.org/spottings/2 ... fullscreen.

However, as Mike has suggested there must be a wood source somewhere. Even if it were dry rot there would be no danger to nearby buildings unless they were in very bad repair / damp; the spores of these things are everywhere, opportunistically waiting for the right (from our point of view - wrong) conditions.

As I read it the OP does not mention whether the husband had a lung problem or was worried about getting one. Some years ago when I had a breathing problem (now sorted) I was sent to a specialist who was doing work on fungal/lung problems and whose eyes lit up when I said I was a mycologist. I had blood samples tested for all a wide range of the usual fungus suspects - I was able to suggest them myself: Cladosporium, Aspergillus, Ulocladium etc. All came back negative in my case, because these are microscopic "mould" fungi associated with damp, poorly ventilated buildings - the black patches on sodden wallpaper and plaster; not fungi outdoors. This is why it is the poorest people in our society who suffer more when other factors - one of which hardly needs naming here - enter the health equation.
"You must know it's right, the spore is on the wind tonight"
Steely Dan - "Rose Darling"
Top
Post Reply
3 posts • Page 1 of 1