Fungus? ID request - really not sure what it is, thx

Please try to include photos to show all parts of the fungus, eg top, stem, and gills.
Note any smells, and associated trees or plants (eg oak, birch). A spore print can be very useful.
Forum rules
Please do not ask for the identification of fungi for edibility or narcotic purposes. Any help provided by forum members is on the understanding that fungi are not to be consumed. Any deaths or serious poisonings are the responsibility of the person eating or preparing the fungus for others. If it is apparent from a post that the fungus is for eating or smoking etc, the post will be deleted and a warning given. Although many members do eat fungi, no-one would be willing to take someone else's life into their hands.
Post Reply
5 posts • Page 1 of 1

Fungus? ID request - really not sure what it is, thx

My name is Gina and I am based in Oxfordshire.

We found this growth on wet soil surrounding rotting birdseed (underneath a bird table of niger and sunflower seeds).

At first we thought it was some sort of insect egg as they are quite tiny (I would say slightly larger than butterfly egg size) but on closer inspection we are not sure. They seem to be all joined and there is a large quantity of them(probably covering a metre square). They seem to begin as white and then turn black over a couple of days. They are also quite soft.

I am just curious as to what it is, as I haven't seen it before. I have tried to search images online, but haven't been able to find anything. Any help would be greatly appreciated ,

I apologize if they are actually insect eggs and I am in completely the wrong place. 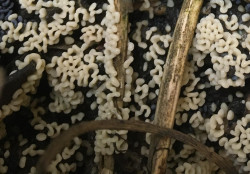 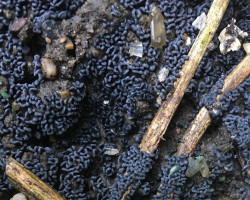 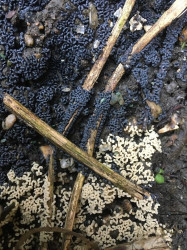 Your find isn't insect eggs, and not a fungus either!

What you actually have here is one of the myxomycetes (slime moulds). - They are a completely separate kingdom of organisms to that of the fungi, but since they are found in similar places, like fungi, they are studied by mycologists.

So you are in the right place! (We actually have a myxomycetes forum here on UK Fungi).

Unfortunately, all but a very few of the myxo's need microscopy to identify them to species, and even suggesting genera is often impossible without a scope.

The myxo you have here is not yet fully mature, which also hinders any attempt to suggest a name.

The white "blobs" are the first stage of maturation after the myxo has "morphed" from its plasmodial stage.

Each of these white blobs is becoming a "fruiting body" or sporangia, from which spores will be released when fully mature.

The grey "blobs" are more mature, (having turned grey from white as they are maturing), but from what I can see, these don't yet look to be fully mature.

If I were to hazard a guess, I'd say that you might possibly have one of the Badhamia species - but that really is just a best guess.

Hope that helps a bit.

Thank you so much for your reply, they/it is in my mums garden, so I will have a look to see if it is still there when I go next and post more photos if I can. Thanks again
Top