Please try to include photos to show all parts of the fungus, eg top, stem, and gills.
Note any smells, and associated trees or plants (eg oak, birch). A spore print can be very useful.
Forum rules
Please do not ask for the identification of fungi for edibility or narcotic purposes. Any help provided by forum members is on the understanding that fungi are not to be consumed. Any deaths or serious poisonings are the responsibility of the person eating or preparing the fungus for others. If it is apparent from a post that the fungus is for eating or smoking etc, the post will be deleted and a warning given. Although many members do eat fungi, no-one would be willing to take someone else's life into their hands.
Post Reply
14 posts 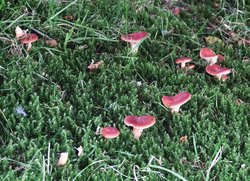 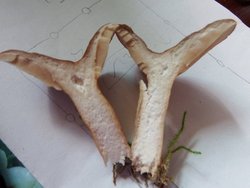 Do you have a gill shot? showing milk if poss.
Adam Pollard
Site admin
Top

Under Beech trees in the moss around the trees and down the sloping bank on which the trees perch. This is the best I can do of what looks like milk on the gills. My camera does on like close ups of pale objects. Could it be that as it has been constantly raining over the last few days, that moisture running down the gills is picking up the spores into droplets? 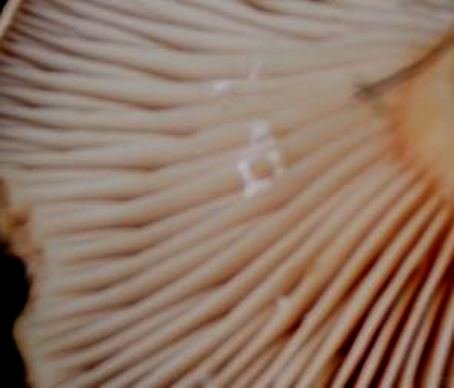 Is the first photo an accurate representation of the cap colour?
(On my screen they look pinkish-red with a lilac tinge?)

Could you give us a close up shot of a single fruitbody showing more detail of the cap and the outside of the stem?

I'd say they must be either Russula's or Milkcaps but whether we can get to species is another matter!
The shape of those in the first photo is more akin to a milkcap - but the colour is more Russula-like.

The final photo you posted does show what typical milkcap "milk" would look like - and those gills don't bring to mind any Russula that I can think of.
But you say that this liquid doesn't appear when the gills are cut.
Sometimes it can take some time for milkcap "milk" to appear after the gills are damaged, - depending on species and circumstances.
I don't think it would be anything to do with rain/moisture running down the gills.

Are the gills friable/brittle - do they tend to almost snap and break up when scratched across or pressed down upon?
Does the "milk" change colour (turning yellow for example?) if allowed to dry on a piece of white tissue or a white handkerchief?

When I took first photos, it had been raining heavily then very bright sunlight and the fungi were this colour, I did check one against my screen, so now I am really puzzled as going out today they are more brownish but vary in colour depending how close they are to the base of the tree, looking downslope a bit they take on a slightly brow to pinkish colour, those that are the smaller ones that is. (this is where I think I am going mad - did they all change colour over the last few days). Here is a photo of the cap showing that they still vary in colour tone - hope close enough photo, and a better photo of the underside.

When you brush the gills they are very flexible and as you do so they release more droplets of milk, which is slightly sticky. Laid on a tissue the milk goes very (just a tinge) of pale orange.

As a bye the bye - the slugs and the squirrels don't like them. They are the only fungi round here (and there are lots at the moment) that show no trace of slug holes or have been eaten down to the stem -(wrong word:) 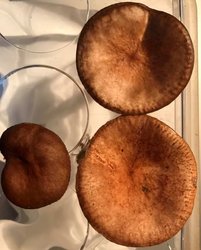 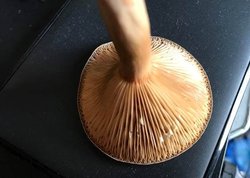 It's a Lactarius, but which?

Was there any Alder or Birch nearby? The colour is a good match for L. lilacinus (Alder)- its hard to see if the cap has any zones, or it could be
L. spinosulus (birch)

Fading is quite common in rain and over time .

If I'd only seen the images from Nellie's last post, I'd have been opting straight away for Rufous Milkcap, L.rufus as a strong contender - but that's primarily associated with conifer, although I understand it's also found with Betula.

Other than that, the only one which (to me) looks macroscopically similar, is L.camphoratus - which is found with deciduous trees, but that should have a strong smell of camphor if left to dry and then kept in closed container.

Those two species have a small umbo at centre of cap, and crenulated cap margins on older fruitbodies - both of which characteristics can be seen in Nellie's photos.

The checklist of British basidiomycota lists them separately, and the The Genus Lactarius (FNE), Vesterholt et al 1998 lists them separately with this note "L. lilacinus might be confused with L. spinosulus which differs by a more strongly zonate and scaly cap. In cases of doubt, the two species can be easily separated by microscopical characters."

Has they been merged recently?
Adam Pollard
Site admin
Top

You asked if they were near Birch or Alder. The Beech which they are under runs along the top what I call a ravine (where once there must have been a river, formed presumably in ice age. on the other side it is virtually all Birch right down to where the river bed would once have been which is virtually bog land. On the side with the Beech and fungi as you progress along to where it slopes down to the flat land (delta) there are Larch, Fir,Tea-Leafed Willows.
Prior to the fungi in photo the this area around the Beech always had Cracked Boletus, which usually spread out across the lawn and around the sheds. This year there are very few of them.
Top

The checklist of British basidiomycota lists them separately, and the The Genus Lactarius (FNE), Vesterholt et al 1998 lists them separately with this note "L. lilacinus might be confused with L. spinosulus which differs by a more strongly zonate and scaly cap. In cases of doubt, the two species can be easily separated by microscopical characters."

Has they been merged recently?

I'd looked in Kibby's book "British Milkcaps - Lactarius & Lactifluus" - which has (in my August 2014 edition) no mention of L.lilacinus in the index.
On reading that, I'd assumed it wasn't included in the book
Going on to read Kibby's details on L.spinosulus, I then searched for it on FRDBI, and saw this: - 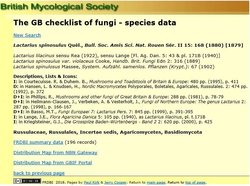 which led me to believe that L.lilacinus was merely a synonym. 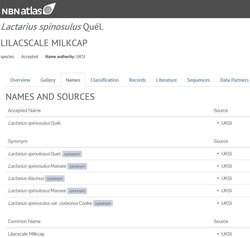 which appeared to confirm that state of affairs, so I didn't investigate L.lilacinus further.

However, following your last post, I've checked again on both FRDBI and NBN, and they both show separate entries & record details for L.lilacinus.
Indeed, Kibby's book (although I didn't get this far before, due to there being no mention in the index

), does actually give a description of L.lilacinus - and, would you believe, there's also a photo of it on the page following that of L.spinosulus!

Regards,
Mike
Common sense is not so common.
Top

Gosh what a lot of information - getting me a bit confused here - are you saying it is Lactarius spinosulus?
Top

to the first question about L. lilacinus and L. spinosulus:
These two are undoubtly two separat species! The one with smooth cap, medium sized and under alder (L. lilacinus), the other small sized, with scaly cap and under birch (L. spinosulus). The differ additionally also microscopically.
It is only L. lilacinus ss. Rea who s synonymous to L. spinosulus, meaning that Rea mistook the species and what he (and only he) depicts as L. lilacinus is in reality what we today name L. spinosulus.

To the second question about what species this is in the original thread:
It is one of the orange brown species, e.g. L. subdulcis (what I favour) or L. decipiens (should be with oak), or even another similar species.