Please try to include photos to show all parts of the fungus, eg top, stem, and gills.
Note any smells, and associated trees or plants (eg oak, birch). A spore print can be very useful.
Forum rules
Please do not ask for the identification of fungi for edibility or narcotic purposes. Any help provided by forum members is on the understanding that fungi are not to be consumed. Any deaths or serious poisonings are the responsibility of the person eating or preparing the fungus for others. If it is apparent from a post that the fungus is for eating or smoking etc, the post will be deleted and a warning given. Although many members do eat fungi, no-one would be willing to take someone else's life into their hands.
Post Reply
1 post • Page 1 of 1

Help needed identifying a large white fungus.
Cap 10.5cm, gently concave rather than funnel-shaped, smooth, white.
Gills white, adnexed rather than decurrent.
Stem white, approx. 1.5cm wide.
Habitat: Found amongst leaf litter and old fallen branches next to birch and willow.
Spore print white. Spores inamyloid, ellipsoidal, slightly lumpy, 4.7-6.7 x 3.2-4.2µm
Only one found. I don’t like unearthing fruit-bodies if there is only one, so I took a slice of the cap to get a spore sample. Image 2 shows the fungus four days later, very slightly pale brown – but no worse for wear and presumably still doing its job scattering spores.
Any thoughts appreciated... Nick 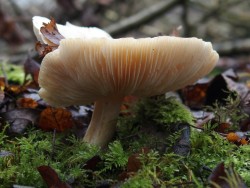 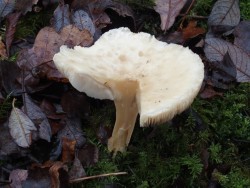 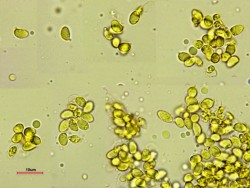