Please try to include photos to show all parts of the fungus, eg top, stem, and gills.
Note any smells, and associated trees or plants (eg oak, birch). A spore print can be very useful.
Forum rules
Please do not ask for the identification of fungi for edibility or narcotic purposes. Any help provided by forum members is on the understanding that fungi are not to be consumed. Any deaths or serious poisonings are the responsibility of the person eating or preparing the fungus for others. If it is apparent from a post that the fungus is for eating or smoking etc, the post will be deleted and a warning given. Although many members do eat fungi, no-one would be willing to take someone else's life into their hands.
Post Reply
4 posts • Page 1 of 1

Just checking that I have identified this right?
On an Ash tree (well I think it is an Ash Tree) Daldinia concentrica otherwise known as King Alfred’s Cakes? 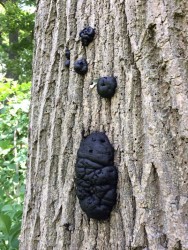 As you probably know, determining any fungus species with 100% confidence from a photo can be somewhat tricky.

Your find does seem to have all the right macro characteristics for Daldinia concentrica - i.e. (certainly one of) the stromata looks to be well over 25mm in size, and the surface appears "reticulate" cracked.
And also, the bark of the tree does have the looks of Ash (Fraxinus) which D.concentrica is mostly found on.

However, (there is always a caveat

) - There are quite a few species of Daldinia and I'm not sure of exactly which species, (other than D,concentrica & D.fissa), have been found in the UK.
Unfortunately, the "go to" reference database (The Fungal Records Database of Britain and Ireland) has been unavailable for several months, and I'm not aware of anywhere else where one might be able to confirm which species have actually been recorded in the UK.

Several species, (including D.fissa), can be ruled out, as they are restricted to burnt wood substrate, but there might be one or two "possibles" still left.

Overall though, given that D.concentrica is by far the most common of the UK species, and with what yours looks like, and if the substrate is Ash, then D.concentrica would be the most likely species.

EDIT - Additional info: - D.caldariorum (6), D.decipiens (2), D.loculata (22), & D.petriniae (2), are the other species that have British records. (Numbers of records as of 2015 shown in brackets).
By reference to this key, available from "AscoFrance": - http://www.ascofrance.fr/uploads/docume ... r-0001.doc
all four can be ruled out on substrate grounds or size of stromata.

So, it would seem that D.concentrica is the only remaining possibility here

Type in "Daldinia" and click "Search" and you can run through the list of finds and look for the ones from GB and Ireland.
"You must know it's right, the spore is on the wind tonight"
Steely Dan - "Rose Darling"
Top

Type in "Daldinia" and click "Search" and you can run through the list of finds and look for the ones from GB and Ireland.

Cheers Chris. - As you say, that could be useful.

I don't suppose you have any knowledge of what's happening re FRDBI being offline?