More a question of ID

Please try to include photos to show all parts of the fungus, eg top, stem, and gills.
Note any smells, and associated trees or plants (eg oak, birch). A spore print can be very useful.
Forum rules
Please do not ask for the identification of fungi for edibility or narcotic purposes. Any help provided by forum members is on the understanding that fungi are not to be consumed. Any deaths or serious poisonings are the responsibility of the person eating or preparing the fungus for others. If it is apparent from a post that the fungus is for eating or smoking etc, the post will be deleted and a warning given. Although many members do eat fungi, no-one would be willing to take someone else's life into their hands.
Post Reply
3 posts • Page 1 of 1

More a question of ID

We had to re-pot a 50 year old Mother-in-laws tongue, which was in a tall wider at the top than the bottom stone pot. It took a lot of effort and cutting the plant away from the side. Having done so we saw that the plant was totally root bound down to about afoot from the bottom where there was a gap. Surprised to see that there were little fungi growing. Question what fungi can grow in total darkness and presumably no air. My daughter leant down into the pot to take a photo, only one photo showing open fungi, the other two showing the fungi emerging. So no photo of gills, or smell, though the gap did smell damp mushroomy. 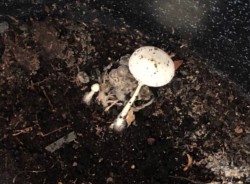 Re: More a question of ID

It's surprising where you might find fungi growing!
Although most fungi will grow where there is light, they don't photosynthesise so don't need it and will happily grow in darkness. (Most commercial mushroom crops are grown in darkness).
Although they were growing surrounded by roots of your plant, there was a small air pocket - albeit that the air in there might have been somewhat "stale", but again, it was obviously enough of a space to allow them to grow.
The spores might have been there all along - coming in with the original plant compost, or they might have blown in on air currents. - It might well have taken years for the conditions to become just right to grow the mycelium network and eventually these little fruitbodies.

Can't be certain from the photo. - More details of gills etc. would be needed - and even then, as you know, it may be a species needing microscopy.

However, the overall shape, and especially the shape of the tiny emerging fruitbody leads me to suspect that you might have Leucocoprinus birnbaumii (Sometimes referred to as "Plantpot Dapperling",

I've had it appear now and again, in the plant-pots of my various cacti.

In my case the mushrooms have always been a sulphur yellow colour, which is the norm for that species. - But it does also occur in a nearly white form. (Whether that would have anything to do with where it happened to be growing I wouldn't know).

If you search for images of Leucocoprinus birnbaumii, you will see what I mean, and you will find several images that do look like your mushroom.

I'm not saying that L.birnbaumii is definitely what you have, but looking at your photo, it might well be.

Re: More a question of ID

Thank you very informative and much appreciated.
Top
Post Reply
3 posts • Page 1 of 1