Discussion about cameras, microscopes, stains, and gadgets, along with useful tips for preparation of fungi samples
Post Reply
36 posts

adampembs wrote:. . . My main reason for a dedicated camera is for size measurements of spores. . . .

If you were to use Micam software (possibly other scope software would work in a similar manner), provided that you can hold the camera such that you are pretty constant in the field of view you get, then you don't actually need a dedicated camera, or indeed, any camera that's physically attached to the scope.

All you would need to do would be to photograph a stage graticule using each of the objectives. - Put those photos in a folder, then open them in Micam. You can then calibrate Micam for your scope/camera, from each photo (for each objective) in the series.

To calibrate (for each objective), you open the photo, type in the lens magnification, draw a measurement line between two known points, tell Micam the length of the line in microns. store the settings - job done. 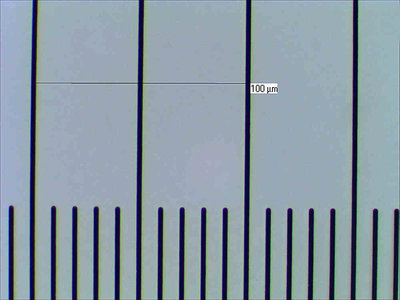 Once that's done, you can simply take photos as you have been doing, store them in a folder, open them from your selected folder in the "Measuring Window" in Micam, and add any measurements, scale-bar, etc.
Micam has now been calibrated, so now knows the length of any measurement line it draws, and automatically shows the length in figures, at the end of each measured line. The only thing you have to remember, is to tell it which objective has been used to take the photo.

NB: The above photo is one of the shots that I did to check the calibration. I simply drew a line between the two points on the photo, and Micam said that the distance was 100µ - which was correct, and thus confirmed that Micam was correctly calibrated for the lens in question.

Provided that you can keep the camera in a reasonably constant position relative to the scope, for every photo you take, (and obviously don't alter the zoom etc, etc.), then your measurements will be reasonably accurate.

Might be worth a try in the meantime, until you decide which route you want to take in getting a scope camera?

Thanks for the reply, unfortunately I am always changing the zoom! The only reliable constants are zero zoom, and I just a circle of the eyepiece, or maximum zoom, which goes in too close sometimes (or doesn't have enough light)
Adam Pollard
Site admin
Top

From what I've read they can't be beat for the price. Look forward to seeing some photos from it.

If you can get results anything like Chris gets - it might be the prompt I need to make me finally take the plunge and upgrade to one of these for myself!

Regards.
Mike.
Common sense is not so common.
Top

I think the camera cost more than the microscope

but didn't want to buy a camera and then regret not spending a bit more.

p.s it will take more than a camera to get results like ChrisY. A better microscope, and decades of experience also needed...
Adam Pollard
Site admin
Top

Well, it finaly arrived but now I have a problem.

I just found out the the camera doesn't work with Micam. Gutted! No twain driver for it.

The supplied software seems ok though. 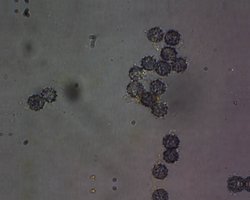 adampembs wrote:Well, it finaly arrived but now I have a problem.

I just found out the the camera doesn't work with Micam. Gutted! No twain driver for it.

The supplied software seems ok though.

You could easily use a method similar to that I described above though - (in the post with the graticule image).

Just use your new camera to take a photo of a graticule (with each objective), send them to a folder, open each photo in Micam and calibrate using Micam accordingly.

From then on you can simply take your photos (with the new camera), which will be sent, (presumably automatically) to a chosen folder.

Just open the photos with Micam, where, (because you have now calibrated it for your new camera -microscope objectives combinations), you will have full access to all the usual Micam facilities.

Once calibrated, it shouldn't involve any more hassle than using only one lot of software.
Take the photos via the camera's supplied software - process them via Micam.

OK thanks, that can work!
Adam Pollard
Site admin
Top

I'm getting horizontal lines which gradually scroll up. It's less noticeable at x400 and x1000 but at x100, its quite bad. I have LED lighting, using a car bulb with 12V adapter. Do I need a better dimmer switch or is there another solution? 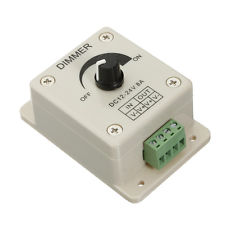 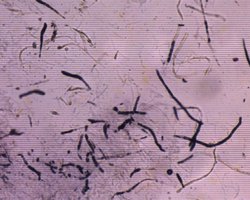 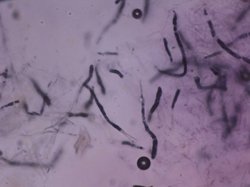 My electrical background is in the industrial/commercial contracting side of things and not electronics, so I can't give you more than the basics of what might be going on, but I think you might have a tricky problem there!

LED's do flicker, generally at twice the input supply frequency (termed the ripple frequency of the output LED driver). - So in the UK, (assuming no filtering is incorporated into the LED circuitry), and with mains frequency of 50Hz, they will have a ripple frequency flicker of 100Hz.
Just in case there are any electronics engineers looking in - I am aware that most LED's (other than those recently developed for commercial lighting situations), only work on direct current, so there has to be some sort of in-built ac/dc conversion/rectification somewhere in the circuitry - but depending on what that consists of, it might only be removing the negative portion of the alternating current waveform.

Such flickering is imperceptible to the human eye in almost all everyday circumstances, so general usage LED dimmer driver circuitry wouldn't need to take it into account. (It would make the products more expensive!).

It's generally more of a problem for video work, when footage is shot in rooms with LED (or fluorescent) lighting. - In those circumstances, it can be removed electronically in post camera video editing suites.
Unfortunately, Digicam type microscope cameras are, in effect, just very simple video cameras, and the still shots from them are simply "plucked" from the streaming video being sent to the computer. (So, if the video contains flicker - the still shot will show the flicker).

Filtering flicker out could be done by introducing a capacitor - but the value of that would need to be closely matched to the components in the rest of the circuitry. The wrong capacitor might botch thing up altogether! (You are in the realms of requiring a specialist electronics engineer).

There are various "Heath Robinson" techniques I've heard of to confirm whether it is in fact LED's that are producing flicker, rather than interference from some other nearby electrical equipment. (Have you discounted that possibility?).
One such being to put the LED at the end of a long(ish) wire, and spin it around over your head as fast as you can in a darkened room. If it is flickering, the circle of light produced will have a strobe effect.
Another method is to use a "spinning top". The disc of which needs to be marked with a large number of lines from centre to perimeter (radius). When spun under the LED lighting (with no other light whatsoever) there will come a point as it slows down, (provided that the LED light is flickering), when the lines appear static, and then start to slowly rotate in the opposite direction to that in which the top is spinning.

Is your dimmer capable of running a halogen lamp of the same voltage? (A halogen lamp would be in the 20-30watts region, as opposed to a couple of watts max. for the LED). If it can, it might be worth a try to see if it improves things.

A better quality dimmer with flicker reducing output circuitry might be available, but I have no idea how you would specify/ensure that what you might buy will definitely work for this particular application.
(If you are handy with a soldering iron, you might be able to get a complete "replacement" LED lighting system for a scope from somewhere like Brunel, and then cobble it together to fit your scope? - they do occasionally have spare parts available).

Might also be worth considering (if you have access to someone else with a scope) trying your camera on another scope that has a proprietary lighting system to see if the problem persists.
Should prove one way or the other whether it is your lighting (or indeed the camera) that is at fault.

Just thought of something that might make my entire reply above complete nonsense - but I can't quite read the details on the dimmer unit photo.

Is your dimmer input supplied by direct current? (i.e from a car battery) or are you feeding it from a mains-low voltage ac/dc transformed power supply?

If it's fed from an ac/dc 240/12v power supply, chances are the output will be via something like a cheap Wheatstone bridge rectifier, which will still give flicker.

But if your supply is pure dc from a12volt battery then the LED's shouldn't be able to flicker at all, which would point to the camera being at fault.

If it is fed from an ac/dc transformer/power supply, you should be able to check the system by temporarily feeding it from a battery of the same output voltage. (Or maybe permanently feed it via battery? - a decent 12v battery should last for weeks/months driving an LED before it need recharging).

I had very similar problems with a GXCAM 9MP camera on a Brunel SP200 'scope (the earlier version compared with the current one on sale, but fundamentally the same microscope). That was using quartz halogen 6v 20 watt illumination (Kohler). I think that basically the GXCAM and the Tucsen function very similarly. I resolved the problem by tweaking the settings of the camera software. That said I haven't had the problem with the Tucsen: the Nikon 'scope dates from the mid 1990s (that's when they came into production), again using halogen illumination.
Chris
"You must know it's right, the spore is on the wind tonight"
Steely Dan - "Rose Darling"
Top
Post Reply
36 posts