As it's currently in the news I thought I would show an image of the culprit. The disease started out as the anamorphic Chalara stage, but (as often happens) this has been followed by the sexual "discomycete" state. A key character separating it from the benign Hymenoscyphus albidus on the same substrate (ash leaves) is the presence of croziers at the ascus bases. H. fraxineus is now all too frequent in the Forge Valley NNR near Scarborough, a site I have known since childhood and which will soon look rather different. 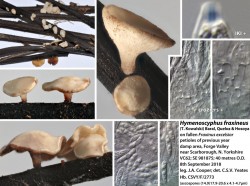 It's open-access, just click on the green PDF button. In this paper are descriptions of some new species, including Hymenoscyphus aesculi on dead horse chestnut leaves. You will see that Zotto Baral used some of my images of that species in the description, so it's officially "British"; scarcely really new to the UK list as it will surely be hiding in lists of other Hymenoscyphus species on the same substrate.

Nicely done Chris. I had a devil of a job to find the croziers and even more trouble getting a photo.
Mal
Top
Post Reply
2 posts • Page 1 of 1