Also known as Nodulosphaeria pontica a matter of opinion really. Recently found on dead stem of Centaurea nigra (hardhead) in a local nature reserve in Calderdale which also functions as an overflow area in the floods which that area has suffered in recent years. 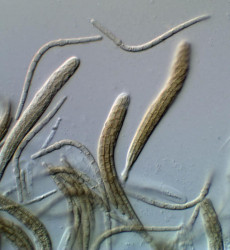 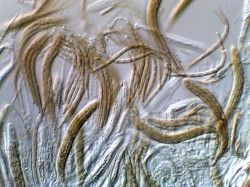 As far as I know this is the 3rd GB & I record. The first was made relatively recently by Marcus Yeo, on Dipsacus. This is the second: http://www.ascofrance.com/uploads/recol ... a-0001.pdf also on on C. nigra, and Enrique Rubio has had it on Sanguisorba minor in Spain: http://www.ascofrance.com/search_recolte/4030. A useful account, with images, can be found here: http://fungi.myspecies.info/taxonomy/te ... scriptions - there is one small error, the type host was in fact a Scrophularia species, see: www.librifungorum.org/Image.asp?ItemID= ... /0371b.jpg (and click on "Next page"). So originally described from an area of the Black Sea coast in Bulgaria - hence presumably the specific epithet, as the ancient Greeks called the Black Sea Eύξεινος Πόντος.

As with so many of these "black dot" fungi clearly under-recorded, though there have been mycologists studying these for many decades. For example a related species, Phaeosphaeria jaceae, which is a stricter Centaurea fungus has 30 records on the old FRDBI, and O. ponticus does not seem to be particularly choosy about host, just presumably it needs suitably sturdy dead herbaceous stems, but probably not common.

Cheers
Chris
"You must know it's right, the spore is on the wind tonight"
Steely Dan - "Rose Darling"
Top
Post Reply
1 post • Page 1 of 1