Not technically fungi, but often lumped together with fungi
Post Reply
3 posts • Page 1 of 1

Found this forum and hope you can help me identifying this myxo? Found end of October in a mixed forest in Berkshire. Is it Mucilago crustacea? 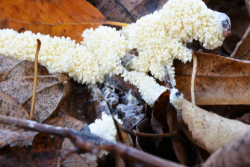 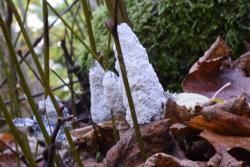 Re: Mucilago? help with ID needed

It may well be Mucilago crustacea, as there are few other species that have similar looks.

However, your find appears to be not quite fully mature, and could, conceivably be something like Fuligo candida, or Brefeldia maxima, both of which can look much the same as your find at similar stages of their growth.

On balance, because the other two are generally only found on dead / rotten wood, rather than around living plants etc., as your find is in the second photo, it probably would be M.crustacea.

Others may be more confident, but If I found this I'd probably want to reserve final judgement until I was satisfied that it had reached full maturity. - (Things don't always grow where the books suggest they will be found).

Re: Mucilago? help with ID needed

Thanks Mike!
Unfortunately I can't go back to the site as I live in Berlin and am only a few times a year in the UK

I see a few black spots, but hard to tell if these are some spores or not. Good to know for the next time, I will look out for different life stages.