Not technically fungi, but often lumped together with fungi
Post Reply
69 posts

This species seems to come up as 'extinct' in UK but maybe just 'under recorded'?
'The more I know the more I realise I don't know'
Top

Pin sharp from front to back and without a hint of digital artefacts!

One of the images on its own would have been absolutely superb, but having a "3D" stereo pair takes it to another level!

I find doing the defocussing of the eyes thing pretty easy, and was able to "lock into" the "3D" image within a couple of seconds.

A hint for those who might be struggling. - While looking at the two images, put a finger, centrally in front of the images, in the space between your eyes and the screen, and slowly draw your finger towards your eyes - focussing on your finger but still keeping the on screen images in view.
At some point when your finger is nearing your nose, you should start to see three images on screen, with the centre image a partly overlapped version of the outer two.
When you get to the right spot, the partly overlapped images will suddenly merge completely.
Just keep your eyes at that state of focus, and remove your finger - voila your brain is tricked into seeing a "3D" image.

Give it a go folks, the resultant 3D image of this myxo is well worth the effort!

Thanks Mark and Mike. Elaeomyxa cerifera was not a UK collection but it is found in Europe.

Here's another stereo of the well known experimental organism Physarum polycephalum (although it is more often seen as a yellow plasmodium).

It's pretty easy to grow the plasmodia and it wasn't too hard to germinate some spores and see swarm cells (with flagella). They were swimming around in circles mostly. An empty spore casing can be seen in the centre of the photo. 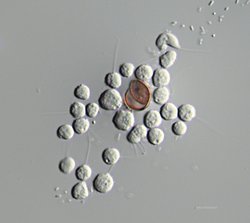 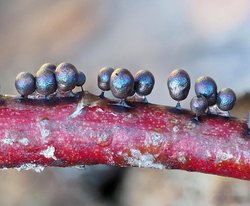 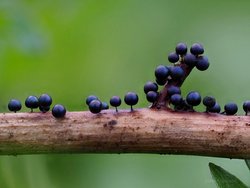 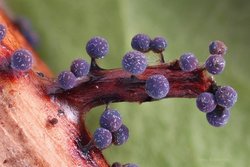 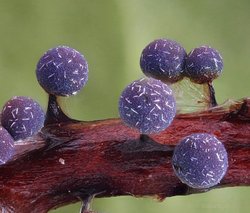 Absolutely superb! - Your myxo images really are extraordinarily good.
In my opinion, even higher quality than those in "Les Myxomycetes" - and I thought those were the best.

Don't know what equipment you are using, - I imagine I would need a lottery win to buy it!!! - but whatever it is and whatever it cost, it was certainly worth it with results like these.
Plus, of course, I acknowledge the skill required in order to get the best out of such equipment!

I do hope that you have some ultimate intent to produce a book on the subject. - I'd definitely be amongst the first in the queue to buy a copy!

Best regards,
Mike.
Common sense is not so common.
Top

Absolutely agree with Mike. Myxos, especially in your images, have an almost sci-fi quality. It could be an alien landscape or something you might see if you had taken a derivative made from Claviceps purpurea..
Adam Pollard
Site admin
Top

Thanks for your encouragement Mike and Adam

I am not using particularly high-tech equipment for the close up macro photos - a Canon 70D, an MPE-65 on an old copy stand and a single flash unit (all bought second hand). It is quite time consuming though as it is all operated by hand and there are quite a few photos stacked to give a final image.

Of course there is a lot more to a good book than a few macro photos (but I think there are some photos included someone else's book which is coming out soon).