I believe this tiny fungus is Saccobolus depauperatus. Gregarious on a sample of incubated equine dung, 0.2 - 0.3 mm in diameter. Image at 20:1 on the sensor of the camera. 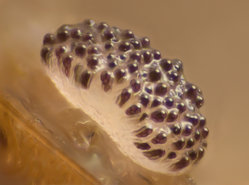 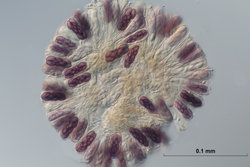 If you've checked the spore cluster measurements I'm sure you'll be correct. Top quality images . . .
Chris
"You must know it's right, the spore is on the wind tonight"
Steely Dan - "Rose Darling"
Top

The most mature spores were around 12x6, I was using the Key below. The clusters were under three times the spore length so around 31 -33 microns.

"You must know it's right, the spore is on the wind tonight"
Steely Dan - "Rose Darling"
Top

I just put this photo on the AscoFrance page too. I'm not sure but I think they may be attached to the remains of a hair in this instance. The surface looks like hair and the diameter is in the normal range for horse-hair. 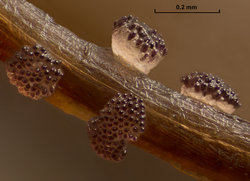 There is an abstract of a paper here which is quite helpful if you are looking at fungi on horse dung (and who doesn't?) because it lists the common ones in order of frequency found in their research.

Hi Dave
looking at those cells towards the bottom right, they look a bit moss-like - could it be the seta of a moss? The surface doesn't look quite right for a hair. Just a thought.

Thanks for that Chris.

It does look different to the usual straw particles I see it on so It may well be undigested moss. I suppose it's rather unlikely that it would fruit on vegetable matter and hair.