I had a conversation last week about how European Pear Rust (Gymnosporangium sabinae) has apparently become much commoner in Cambridge over the past 2-3 years In Notts I've tended to find it whenever I've come across a pear tree, and similarly in Berkshire. It so happens I have two or three records from North Cambridge (TL4461) from back in 2012, so I never gave them a thought.

I've been looking at other available distribution data (which, of course, are not necessarily a proxy for abundance). There seem to be plenty of records for Leicestershire (via NatureSpot) and Worcestershire (Worcs BRC & Wyre Forest Study Group). Our own Chris Yeates "Rusts of Yorkshire" in the version I have (2012) has just 2 old records. I don't believe the rust has been found in SW Wales by Arthur Chater, Nigel Stringer and Paul Smith (perhaps they've been too busy with exotic smuts), but is known from Anglesey & Caernarfon (Woods et al,).

Therefore I thought I'd try and poll people to see if they regularly see it in their patches, and if they have any impression of increased abundance.

BTW: I get the impression that many modern records are on Pear rather than Juniper, but the evidence is strong that this species is heteroecious and requires both hosts.

Hi Jerry
I'll keep an eye open, I don't come across many pear trees - though I'm sure I saw nothing on a tree I noticed in suburban Huddersfield a week ago.
To give people an idea of what they are looking for: 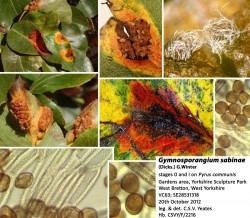 Never looked for it before but I found a few examples on pear trees at Kingston Lacy, Wimborne, Dorset in October.
http://www.dorsetnature.co.uk/pages-gall/g-333.html
Jenny Seawright
Top

I overlooked the RHS Pear Rust survey so now have a lot more records across the country. Chris you may be interested there are several which I don't think you have in Yorkshire (available on NBN Atlas) or from Andy Salisbury at RHS.

Return to “Rusts, Smuts, and Mildews”