Please try to include photos to show all parts of the fungus, eg top, stem, and gills.
Note any smells, and associated trees or plants (eg oak, birch). A spore print can be very useful.
Forum rules
Please do not ask for the identification of fungi for edibility or narcotic purposes. Any help provided by forum members is on the understanding that fungi are not to be consumed. Any deaths or serious poisonings are the responsibility of the person eating or preparing the fungus for others. If it is apparent from a post that the fungus is for eating or smoking etc, the post will be deleted and a warning given. Although many members do eat fungi, no-one would be willing to take someone else's life into their hands.
Post Reply
3 posts • Page 1 of 1

Hello. Can anyone tell me if these are Lactarius deliciosus or Lactarius deterrimus? And more importantly how to distinguish between the two. I am inclining towards the latter with the less chunky stem except that the milk doesn’t seem to be dark dull wine red as stated in Roger Phillips. Thanks for any help 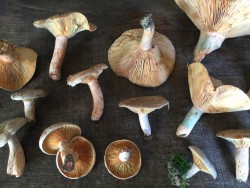 Going on what I can see from the photo, and without further information, it's possible that you have both here!

Firstly, photos showing numerous fruitbodies (at least fourteen, and maybe even a small part of a fifteenth to be seen here!), especially when they have been transported away from their natural environment, always suggest that the request for ID might be more related to culinary intentions rather than pure mycological interest!
Whilst collecting three-maybe four fruitbodies at different stages of growth can be very useful towards obtaining confident ID's - Fourteen and more is rather over the top if we are considering mycological purposes only!!

However, since you have not mentioned edibility, and giving benefit of doubt: -

The latex from both species is bright red-orange when first released. That of L.deliciosus turns to a darker, more red colour after a period of time and eventiually after maybe a few hours, has greenish tones.
That of L.deterrimus turns to a dark-wine red, then brownish, and eventually dark green.
Overall though, we are talking timescales of several hours rather than a few minutes, so rather slow, and a rather subjective, as different people often describe these changed colours differently, so not really the best of characteristic for separating the species.

Perhaps one of the best ways to differentiate between the two, "in the field", is that the caps and stems of L.deliciosus are "scrobitulate". - Meaning that they have readily identifiable bright orange "pits" - especially towards the lower half of the stems.
Some of your fruitbodies are showing these pits on the stems, but some don't seem to have any such pits at all. - Hence, in the absence of other relevant information, my comment that you may have both species here.

Very helpful. Yes, I thought perhaps both too. I had identified L.deliciosus growing with pine before previously - and some of the specimens today were from the same place. But what gave me pause were some of the specimens growing nearby, but in more mixed woodland, (but still with pine in the vicinity.) These were the ones with more slender stems (and not pitted,) which made me wonder about the accuracy of my initial identification. Just to clarify, the number of specimens was to have the full range of young/mature caps from both places I did get a bit carried away! - I do understand the forum rules about posting about edibility. Thanks again.
Top
Post Reply
3 posts • Page 1 of 1