Happy New Year to all
Incubated rabbit dung collected just before Christmas has turned up what seems to be a very rare fungus.
Identifying it was something of a problem as it is not in van Brummelen's 1967 monograph of Ascobolus and Saccobolus species, and Doveri's monumental work on dung fungi https://www.myko-shop.de/Doveri-Fungi-fimicoli/en mentions it only in passing. Eventually via ASCOfrance and particularly http://fungi.myspecies.info/all-fungi/s ... herosporus finally sorted it out.
Originally described from pheasant dung in Belgium, it has also been recorded on vole and rabbit dung. There appear to be only a couple of records each from Belgium, France and Austria, plus Nick Aplin's 2017 find on the linked webpage. Although there are not many people working on fungi like these there are quite a lot of Saccobolus records on various sites. Plus it is a very distinctive member of the genus, unlikely to have been overlooked by someone who has gone to the trouble of culturing and microscopical examination. 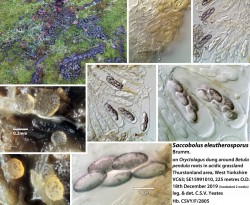 Key characters are the fact that the spore-clusters have a tendency to come apart after ejection, perhaps due to the relatively sparse and scattered pigment. The paler asci are noticeable (see the bottom left image, where the contrast with an adjacent ascoma of Saccobolus depauperatus is also in shot. The yellow contents of the external cells and in the paraphyses is apparently often, but not always, present.
I would like to extend my thanks to Nick Aplin and to Paul Cannon for the confirmation and for their useful comments.
"You must know it's right, the spore is on the wind tonight"
Steely Dan - "Rose Darling"
Top

Re: An apparently very rare discomycete

Hi Chris
As you are aware, I saw this report earlier this week as a download from Paul Cannon. It's good to see your images in a larger format on Paul's website.
I have not looked at dung fungi for a couple of years so this will inspire me to start again. I have my neighbour's Manx sheep on the croft so they might produce something exotic!
Regards, Chris
http://outerhebridesfungi.co.uk
Top
Post Reply
2 posts • Page 1 of 1