Found a couple of days ago on a dead stem in a stand of hemlock, Conium maculatum which must be impressive in the summer as some of the still-standing dead stems were well over 2 metres high. I understand that sludge from a nearby sewage fam was dumped there some years ago - hence the luxurious growth, presumably. Incidentally in scrub/woodland nearby were scores of Sarcoscypha austriaca - well into three figures, and I didn't do a careful search.

It has been found on a range of dead woody herbaceous stems, chiefly those of Arctium and several umbellifers (most Arnium species are coprophilous). On FRDBI (when it is functioning) the records distil down to fewer than ten; one previous Yorkshire record - I found it on a dead hogweed stem in a very different habitat, on the Magnesian Limestone near Roche Abbey in October 1990.

Presumably overlooked, but once examined under the microscope rather distinctive - the spores with a gelatinous cap at each end and (key) eventually forming an equatorial septum (not always easy to see). 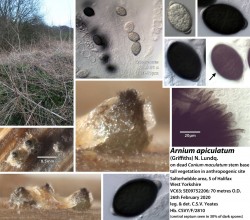 Arnium apiculatum
"You must know it's right, the spore is on the wind tonight"
Steely Dan - "Rose Darling"
Top
Post Reply
1 post • Page 1 of 1