Found yesterday in a local conifer plantation. These appear every year at the site - but this year they are particularly abundant: - 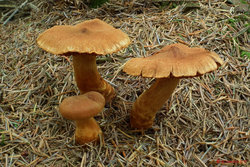 This is the species made famous (infamous?) by Nicholas Evans, aka the celebrity author of the novel "Horse Whisperer".

In 2008, Evans collected, cooked and served Cortinarius rubellus, (syn. Cortinarius speciosissimus), to himself, his wife, her brother, and sister-in law. - With almost tragic results.

Some reports had said that he had thought they were Chanterelles, but from quotes made in a somewhat grim-reading interview in 2011, (see link below), he had actually been under the misapprehension they were Ceps (Boletus edulis).

He is quoted as saying "It had been 10 years since I’d picked Ceps and I thought: these are a bit more ginger-coloured than I remember. I didn’t spot the crucial difference – that they had gills and Ceps don’t".

At the time of the 2011 interview (3 years after the event), his wife and her brother were still on regular dialysis, awaiting kidney transplants.
Evans's own life was also saved by having a kidney transplant. (The kidney being donated by his daughter Lauren).

Moral of the story - If you are going to eat foraged mushrooms, be very, very, very, sure you know what they are!

Sad story but underlines the importance of 100pct confidence in identification before trying to eat wild fungi. On Glamorgan Group Forays we are often asked by inexperienced attendees 'can we eat this?' Big warnings!!! No liability for our identifictions. I am very cautious not many species I would eat. Now a bit hesitant with Laetiporus sulphureus following recent conversation with Martyn Ainsworth - 'some people even after eating for a number of years with no problems have reported side effects'. Even A.bisporus may not be so innocuous as we believe!
Mark
'The more I know the more I realise I don't know'
Top

First visit of the year (to this site) today, and pleased to see them in great abundance once again.

and they are spreading to several areas of the site where they haven't previously been recorded.

Click on thumbnail to view image at full size. 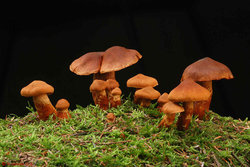