Mollisia - is it impossible?

Mollisia - is it impossible?

Hi,
“When Mollisia does get finally properly revised at the species level (i.e. when some money becomes available to do the work), I think it should require a big collaborative group effort involving lot of redescriptions, recollections and sequencing, otherwise it'll become a horrible mess - so keep hold of your specimen and images until then!”
This is the sensible advice I got from Brian Douglas at Asco France.
The comprehensive online key at
http://www.mollisia.de/Schluessel_englisch.html
is anonymous, but seems to be authoritative. It lets you know that you really need to look at fresh material, and that each determination is going to be a big job, involving chemistry. There seems to be increasing evidence appearing that looking at dead herbarium specimens is not equivalent to looking at fresh material, meaning that you can’t necessarily just dry everything down and do ID's later if you ever find the inclination or time.
The alternative is perhaps (a) stick to simpler ID resources eg Ellis and Ellis, Peter Thompson, and put a name to your Grey Disco – knowing that it is not really adequate in light of current research, (b) limit yourself to just one Grey Disco per survey and submit your detailed findings to peer review e.g. Asco France or (c) bite the bullet and simply record them as Grey Discos, with a brief description of substrate and some basic microscopy e.g. spores etc. I've done this on the attachments.
As we’re surveying Longshaw with the (optimistic) aim of describing overall fungal abundance, as well as diversity, we might have to use option (c) more frequently. We collected 5 specimens last Wednesday 20/5/15 – four of which I looked at as carefully as time would permit, one which I discarded as I had had enough! 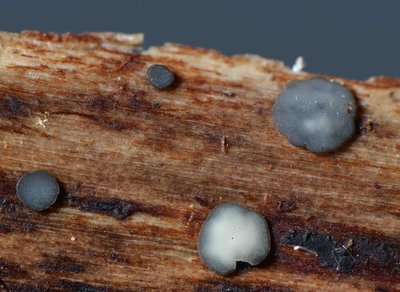 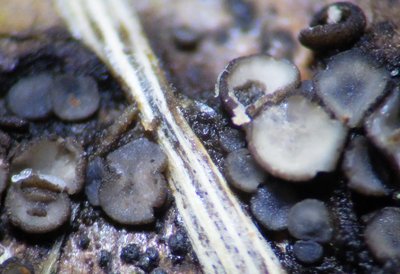 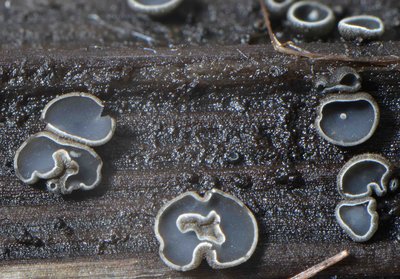 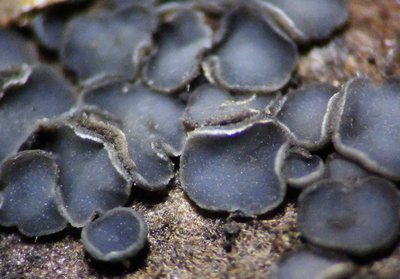 If you backtrack to the Homepage on the site where you found the key, ( http://www.mollisia.de ), you will see that it is the website of Andreas Gminder (Mollisia on WAB)

Hopefully, Andreas will at some point, discover and register here with UK Fungi - As with some very respected people who have already signed up to the site, his knowledge and willingness to help people would be invaluable.

For us lesser mortals - I can empathise with your dilemma. Finding something and then being unable to confidently identify it can be mightily frustrating!

Hi Steve
if you note: you can then, based on differences (and similarities), call them "Longshaw Mollisia species a" "b" etc. and include them in lists and totals. Identifying a fungus is not quite the same as naming it sometimes. The ability we have now to take photographs is such a boon in this respect - we can't all draw (or indeed see) like Zotto . . .

That said there are distinctive Mollisia species - just stay clear of the ones on indet. wood

. And make sure they are Mollisia species to start with (i.e. with refractive vacuolar contents in the paraphyses)

cheers
Chris
"You must know it's right, the spore is on the wind tonight"
Steely Dan - "Rose Darling"
Top

Many thanks Mike and Chris,
I suspected it might be Andreas' key.
The list of items to tick is very useful Chris - my Umbellifer - Hogweed (?) Grey Disco doesn't look like Mollisia as it lacks the refractive elements – possibly it’s Pyrenopeziza. It’s the one with “double” growth of the margin. I can’t find anything with spores very close to these on Hogweed: they are dropped spores, all between 17 and 19 long, and 2.5 – 3 wide, so quite long. Just a couple of small oil guttules at each end. Paraphyses are thread-like 2-4 wide. Asci typically 55x7, tips blueing in Meltzer’s, contents reddening. The excipular cells are oblong to spherical, up to 11 x 5, with a "finger" on one cell, 21 x 3.
Regards,
Steve 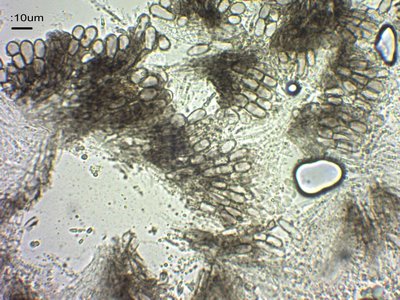 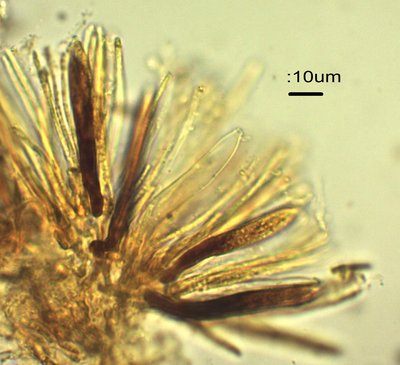 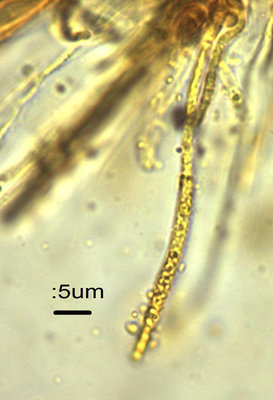 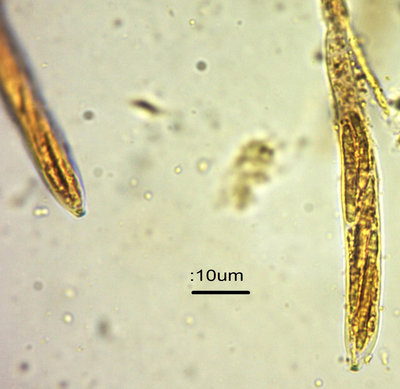 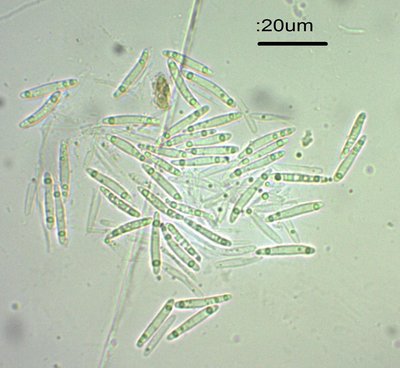 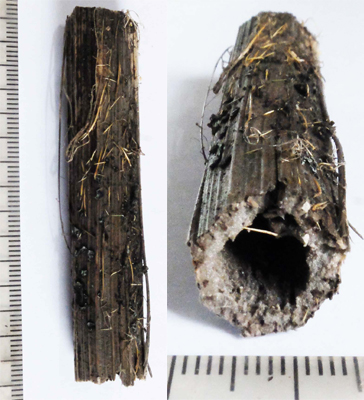 Since you were kind enough to quote me, I thought I'd chip in...

I agree with Mike and Chris. There is a big difference between recognising a species that appears often in your locality; putting it into a plausible morphospecies concept using a key or the literature; and actually getting it completely right (which may be impossible in many cases at the moment, even with sequencing)... But anything is better than nothing, as long as you have details to back it up!

Your approach C is probably the best for now. I would personally just try to ID using some form of literature as best I could, and use "cf." (e.g. Mollisia cf. cinerea or similar) if there is any morphological discrepencies or if it's a known morphospecies concept.

There are probably loads of undescribed or poorly described Mollisia and Pyrenopeziza species. Many or most of these will have apothecial states - but which ones have been described, and which ones just look similar, and which have been placed in the wrong genus? Much of the literature is very obscure, which doesn't help. It's a massive puzzle which most mycologists are smart enough to stay away from. But it's important to solve from my perspective since these species turn up as "unnamed" symbionts of plants in molecular ecology surveys, and they need names so people can cross-reference between surveys and work out what these species are doing ecologically.

The field mycology side of it is very frustrating, but probably more so for anyone trying to work on these species taxonomically. Some can be morphologically identified from apothecia with reasonable reliability; some have a few look-alikes but may be resolved into field-recognisable species with more work; some are variable; and others can only be determined to true species level by sequencing or anamorph studies. One goal of any sequencing work should be to identify which can be identified morphologically (probably many) and which can't (also probably many). But this will take a lot of time to work out, and the nomenclature behind it all is also a nightmare.

Andreas' key is an amazing work and one of the best resources out there at the moment, but it features a limited number of species, is based on his localities and so many of the species may be different to those in the UK. Even then, some of Andreas' concepts do include a number of phylogenetically distinct species - so this is still a mess in places.

Along the same lines as Chris said: getting the species exactly right is extremely difficult in many cases, but much easier in others. Species with distinct habitats, ecology and different apothecial characters from "common" species (which are probably morphological species concepts in most cases) are probably fairly good concepts. Your species are still "what they are" regardless of the names, so they're worth recording and getting images for.

Maybe the main thing is to get records (in whatever form you think best), and make sure you have data to illustrate/correct this later when some parts of Mollisia become clearer? Not the ideal solution - but it's the best I can think of for the moment.

Excellent advice Brian,
This is just what we have been doing at Longshaw, ie recording as much as we can to whatever level we are able. We have lots of unidentified crusts in the records, and in the herbarium (a place of dread). Every record, to whatever level of certainty, has an English name or description, and as much photographic evidence as time allows us to assemble. We also have a column in the records for "type" of fungus eg. "Mushroom/Toadstool"/ "Tiny Asco" / "Carbon Fungus" etc, which at least allows us to broadly describe the field mycology of parts of the Estate. We are now seeing a shift in the imbalance at Longshaw from being just about 99% Waxcap Grassland-focussed. The numerous woods have been barely surveyed before. I think it's very needful to assess the mycology as comprehensively as possible in a place of such importance as Longshaw at this time, as my feeling is that all kinds of wildlife are coming under sometimes drastic pressures (three ancient woodlands under threat of destruction near Sheffield last year, maybe the one at Longshaw will be reprieved) - with ever-increasing human activity.
So we'll be doing just what you and Chris suggest. Record it, don't ignore it!
Regards,
Steve
Top
Post Reply
7 posts • Page 1 of 1